Picks from the Backstretch: Florida Derby
By Teresa Genaro 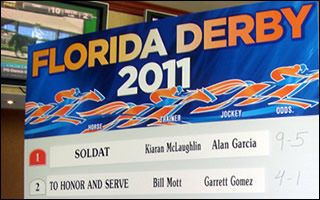 On the Friday morning after the draw for the 2011 Florida Derby, I walked around Gulfstream to get a sense of which horses the folks on the backstretch were favoring. The task was more difficult than you might imagine; a surprisingly high number of people were not inclined to talk about it. One jockey who doesn’t have a mount in the race said, “What do I care who wins?” and a lot of other people – grooms, trainers, and exercise riders – said that they didn’t even know who was running.

But a few intrepid souls were willing to go on the record, and among those with an opinion, Nick Zito’s Dialed In gets the nod.

Allen Jerkens, “The Chief”, trainer:
“Who do I like in the Florida Derby? Jimmy’s horse! Who else?” (Jerkens’s son Jimmy is running Arch Traveler in the race.)

Colin Rhoden:
“I’m a man without a title on the backstretch; I work for the Chief. I like To Honor and Serve. I like the way he carries himself in races and Billy Mott’s a pretty good trainer, and he’s very patient with him.”

Peter Walder, trainer:
“I like Dialed In. I really like that horse. Sentimentally, he’s my neighbor. (Trainer Nick Zito and Walder share a barn on the Gulfstream backstretch.) And I saw that horse when he ran in the Holy Bull, and when he walked into the paddock, my jaw dropped. That horse is just drop-dead gorgeous, and I just think if there’s a little bit of pace in there, he’ll definitely get the mile and an eighth, and he’s just a racehorse. I think that the only thing that can get him beat is his rider (Julien Leparoux). I love that horse.”

Robin Smullen, assistant trainer:
“I like To Honor and Serve, though he may need another race. He was a little short for the last one; he had to be, having six works before, so he’s probably a little short for this one, too. But I like him better than anybody else. Obviously, I like his breeding (Bernardini – Pilfer), but he’s a pretty good-looking horse. He’s a little tight in the waist, but other than that, he’s big, lanky, looks like he can run all day kind of guy.”

Donna Green, trainer:
“I’m a Soldat fan. He’s a young horse and you got to watch him blossom, and he ran such a huge race last time out.”

Elizabeth Grey, trainer:
“Soldat. Just impresses me more than the rest of them. I mean, To Honor and Serve ran great, but he’s got to come back and do that again. Something about Soldat…that’s my pick.”

Ron Nicoletti, Gulfstream Park handicapper and race analyst:
“I like Dialed In because there seems to be a ton of speed in there. I liked his race last time out, looks like they were schooling a little bit to come from off the pace, not that he didn’t come from off the pace before. I just think he’s going to run well, the race sets up perfectly for him. You got speed on the inside, speed on the outside. He looks like the best closer in the race and I always liked him from day one, so I’m rooting for Nicky Zito to win his second consecutive Florida Derby.”

Joe Petrucione, freelance consultant and racing analyst:
“I like Nick (Zito’s) horse (Dialed In). Looks like it’s going to set up really well for him; there’s going to be a fast pace and he had a great prep race against older horses. He got a lot of dirt in his face, he got a lot of experience; he needed that. I think that’s going to move him up a lot.”

Michelle Bern, Tim Hills’ barn:
“I like Dialed In because he is not only fast but versatile, and I believe he is improving every race.”

Update: The backstretch called it!