Celebrating Brass Hat with Replays
By The Editors 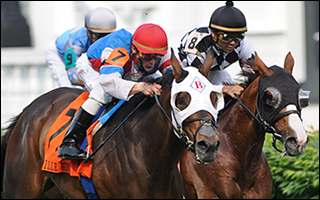 It was announced today that 10-year-old gelding Brass Hat would be retired:

Trainer Buff Bradley said he and his father, Fred, made the decision after the horse “did not appear to be as free moving as he once was.

We can’t think of a better way to say thanks to this Omnisurface Star than to watch him in action. Thanks for the memories!

Update: Churchill Downs had a retirement party for Brass Hat on Saturday May 28, here’s a photo gallery.