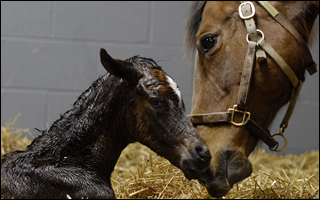 Those who watched the PBS documentary Thoroughbred: Born to Run that aired in May of this year will surely remember the little foal out of Cerise by Point Given. We watched her life unfold from conception to birth to cutely frolicking in the paddock. The foal, born at Stone Farm, is now a 2-year-old and has been entered in her first race.

Cherry Point is owned by Donnybrook Stables and trained by Tammy Domenosky. She’s entered in the seventh race at Hawthorne this Friday the 14th, a $32,000 maiden special weight going a 1 1/16 miles on the turf.

Tony Fischbach of Donnybrook Stables shared this about Cherry Point:

Cherry Point has been a great filly from the time we purchased her at the Fasig-Tipton KY Fall Yearling Sale last October. She was named by one of our partners after a small Marine Corps Air Station named ‘Cherry Point’ in North Carolina. As a part-time pilot, the air station was near and dear to him.

Cherry Point was broken and started her 2-year-old initial training at a breaking and training facility in Ashland, VA and was later sent to Arlington to start training for the races. She has always been a filly with plenty of spunk and attitude, and she certainly shows off those characteristics in the shedrow and around the barn. Even though she is not an overly large filly, she typically gets her way. She is all business during morning training hours, so we just hope that translates to the races in the afternoon.

She is part of a great family, as her older 1/2 sister named Blush is the dam of Derby Kitten, Graded Stakes winner of the Lexington Stakes as a 3-year-old on the way to the Kentucky Derby and recent winner of the Ontario Derby at Woodbine.

Debut races bring feelings of excitement, anticipation, promise and of course nervousness. She drew the 12-hole in a full field, so the racing gods are certainly going to make her work for it! Wish us luck and and safe trip! That’s all I ever hope for in a debut.

Best of luck to her and her connections!

If you missed the documentary, Teresa at Brooklyn Backstretch goes into detail in her review of the film. The entire film is available via streaming at the PBS site.

Other notable and unnamed moments
5:50 – foal who stood up in the rain is Arthur’s Tale
51:00 – Sheik Mohammed buys Chimayo for $3.1 Million

Post Race
Cherry Point broke a bit awkwardly and showed nice tactical speed to gain the lead, but tired going into the stretch and was eased (replay). According to her connections she came out of the race OK and they look forward to preparing her for her next race!

Update 12/5/2011
Cherry Point broke her maiden by 11 1/2 lengths in the first race at Mountaineer! Congratulations to her and the team!
Chart (pdf)
Replay