A Look at Champions Day
By Jessica Chapel 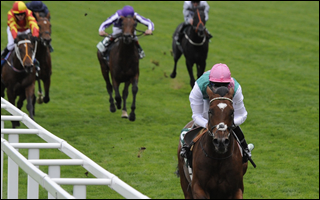 The first ever British Champions Day is this Saturday at Ascot, and organizers couldn’t have dreamed of a splashier inauguration for the new year-end fixture when they announced it last fall. Undefeated Frankel headlines. The Queen will attend. And advance wagering on the richest day of British racing in history has already topped $47 million.

With five stakes races worth approximately $4.6 million, the six-race card is designed to be an emphatic ending to the British flat racing season and to evolve into a championship extravaganza that can rival the Breeders’ Cup or Arc day as a draw for the world’s best horses.

Frankel, rated the best horse in the world by the Racing Post, is entered in the Queen Elizabeth II Stakes, which will be his first start since winning the Sussex Stakes at Goodwood in July (replay). He’s expected to meet Excelebration, a colt on the improve who was beat just 2 1/4 lengths by Frankel in the St. James’s Palace Stakes in June (replay). The Queen Elizabeth II is a one-mile race with a purse of approximately $1.6 million.

The other stakes scheduled are the $2 million, 1 1/4 mile Champion Stakes, the richest race ever to be run in Britain; the 1 1/2 mile Fillies and Mares Stakes; the six-furlong Sprint Stakes; and the two-mile Long Distance Cup.

“There are five great races to look forward to at the best track in the world on a nice autumn afternoon with some of the best horses in the world running,” jockey Frankie Dettori — who has a mount in every race — told the Press Association earlier this week.

There are three weeks between Champions Day and the Breeders’ Cup, enough time to recover, ship, and run back. But it’s uncertain how many might make that trip. So You Think, entered in the Champion Stakes, is possible for the Breeders’ Cup Classic.

Races begin early in the United States. Post-time for the first stakes, the British Champions Long Distance Cup, is 8:50 AM ET; the Queen Elizabeth II Stakes can be seen at 10:35 AM ET.