The Race That Stops a Nation: Melbourne Cup 2011
By Valerie Grash 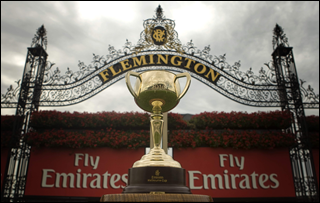 On Tuesday, November 1, 2011 at 3:00 p.m. (Monday, 12 midnight U.S. Eastern), millions of Australians will tune in for the 151st running of the Melbourne Cup—a race so entrenched in Aussie culture that even those who rarely give horse racing a second thought will partake in the obligatory wager.

For Aussie racing fans (not to mention breeders), it will also be a day of much lamenting, as the field of 24 this year is dominated by European-bred and/or raced horses; just three entries (The Verminator, Niwot, Older Than Time) were bred in Australia, and the usual “go-to” country for stamina, neighboring New Zealand, contributes only three entries (Precedence, Shamrocker, Tullamore). Unlike previous years, not a single Asian-based horse made the field.

Love American Style
Last year’s champion Euro invader, the French-raced (and American-bred) Americain (Dynaformer) is back, looking better than ever off an impressive win in the Moonee Valley (Drake International) Cup. As topweight, he’ll carry 128 pounds breaking from barrier 15. Somewhat surprisingly, another American-bred horse also appears promising; sold to Australian interests earlier this year, 8-year-old Grade 1 Hollywood Turf Cup winner Unusual Suspect (Unusual Heat) has run three times thus far Down Under, with a good sixth-place performance in the Caulfield Cup. The query for him is the 2-mile (3200 meters) distance, but weighted with 119 pounds and an excellent post (7), he’s an intriguing candidate with Sydney’s top jockey Nash Rawiller aboard (if his suspension appeal is upheld). And what a coup it would be for California stallion Unusual Heat to get a Melbourne Cup winner!

The French Connection
Of the Euro invaders, Dunaden (Nicobar) has generated the most buzz—and not just for his red-hot jockey Craig Williams (again, pending a last-minute appeal of a racing suspension). Earlier this year Dunaden easily defeated Americain in the Prix de Barbeville at Longchamps, and then he narrowly missed winning the Prix Vicomtesse Vigier. While not a placegetter, he again finished ahead of Americain in the Prix Kergorlay at Deauville in August. Imported to Australia, he captured the Geelong Cup in his first start. Carrying 120 pounds, he drew an excellent post position exactly mid-field (13). If Williams can’t ride, Christophe Lemaire will partner Dunaden.

While trainer Luca Cumani’s preferred horse Bauer does not get a start, Cumani does have two entries: lightly regarded Drunken Sailor (Tendulkar) and French-bred Manighar (Linamix). The seventh-place finisher in last year’s Melbourne Cup, Manighar appears in good form after a fourth-place finish (ahead of Dunaden and Americain) in the Prix Kergorlay and a nicely closing fourth in the Caulfield Cup. With Damien Oliver aboard, he’ll need a little luck breaking from barrier 21.

Godolphin Blue
Trainer Saeed Bin Suroor’s entries Lost in the Moment (Danehill Dancer) and Modun (King’s Best) have some promise. A three-quarter brother to Garden City Handicap victress Luas Line, Lost in the Moment was beaten by only a head in the 2-mile Goodwood Cup this July—a race that also featured three other Melbourne Cup runners (Fox Hunt, Manighar, Red Cadeaux). His jockey from that race, William Buick, takes the ride from barrier 3. Interestingly, Modun prepped for this race by winning the September Stakes over Kempton’s all-weather track; he’s never been tested beyond 14 furlongs, but his half-brother Patakai won the 2-mile Queen’s Vase (not to mention running second to the incomparable Yeats in the 2 1/2-miles Ascot Gold Cup); another half-brother Saptapadi finished second in the 2-mile Henry II Stakes. This is also the family of Breeders’ Cup Filly & Mare Turf champion Islington.

For Johnston, the well-traveled Jukebox Jury looks particularly promising off consecutive wins in the Prix Kergorlay and Irish St. Leger (the latter in a dead-heat finish with Duncan, just a length ahead of Red Cadeaux). He does like running on or near the lead, though, which could work against him if a speed duel develops; although heavy rain isn’t expected, Jukebox Jury has never run on a truly wet track. Johnston’s other entry Fox Hunt (Dubawi) has been an iron horse this year, running either first or second in seven of 11 starts. However, only two of those starts were in group company, winning the German St. Leger most recently and finishing only a half-length back of the winner Opinion Poll in the 2-mile Goodwood Cup.

The better of Yorkshire-based trainer Brian Ellison’s two entries is Moyenne Corniche (Selkirk), a narrow third-place finisher in the Herbert Power Stakes in his first Australian start. The most serious concern will be his ability to get the 2-mile distance. Stablemate Saptapadi (Indian Ridge) is a half-brother to Godolphin runner Modun and, although he has placed at this distance, he just doesn’t have the class. His two Australian starts, in the Herbert Power and Caulfield Cup, were disappointing, and it’s hard to imagine an upset win by him.

Home Field Advantage
In addition to import Illo, Bart Cummings’ New Zealand-bred Precedence (Zabeel) returns after an unlucky eighth-place finish in last year’s Melbourne Cup, but just isn’t going well enough this year. Neither is Australian Derby winner Shamrocker (O’Reilly), one of only two mares in this year’s race. The other is Gai Waterhouse’s Older Than Time (Don Eduardo), who ran second in the 2-mile Sydney Cup in April over a heavily rain-affected track. With blinkers added, she ran well early and then faded in this past weekend’s Lexus Stakes; even as the low weight in the field (112 pounds), it’s unlikely she’ll be a factor off that performance. Waterhouse’s other starter Tullamore (Savabeel) is in excellent form, following up his third-place finish in the Caulfield Cup with a runner-up performance to Americain most recently. Carrying a mere 115 pounds with Chris Munce aboard and breaking from barrier 12, Tullamore comes to the race with several advantages, but his greatest test will be the distance.

Trainer Chris Waller enters The Verminator (Jeune), winner of the 12-furlong Metropolitan before severely disappointing in the Mackinnon Stakes, a race that may have been too short for him. As the son of a Melbourne Cup winner, The Verminator has the damside breeding to back up his stamina claims with his Caulfield Cup winning damsire Fraar. Waller’s other entry is Irish-bred Hawk Island (Hawk Wing) who finished runner-up to his stablemate in the Metropolitan but well back in the Caulfield Cup. He came up lame in April’s Sydney Cup, his only previous attempt at the 2-mile distance.

Other Aussie-trained contenders include At First Sight (Galileo), last year’s Epsom Derby runner-up who’s now raced four times in Australia with increasingly better results. He’s never attempted this distance, but even on the damside he’s got plenty of stamina, with Prix du Jockey Club winner Bering as his damsire; this is also the family of La Prevoyante victress Herboriste. Another son of Galileo, Niwot failed to last in the Caulfield Cup, but then popped a surprise victory going even longer in this past weekend’s Lexus Stakes. He’s a fascinating prospect carrying a mere 112 pounds and breaking from barrier 9, as he also won the 2-mile Andrew Ramsden Stakes here at Flemington back in May.

Irish-breds Glass Harmonium (Verglas) and Mourayan (Alhaarth) enter off a one-two finish in the Mackinnon Stakes. Well-weighted and with good results over the Flemington track, both could be very dangerous. After being a perennial bridesmaid to Fame and Glory (not to mention Sea The Stars) in Europe, Mourayan was exported in 2010 to Australia, where he ran third in last year’s 2-mile Sandown Cup; he’s in the best form of his career and could perhaps pull a bit of a shocker. Ditto for Glass Harmonium, a front-runner who could be in danger if there’s a hot pace; unquestionably his stamina comes from his damsire Darshaan, as well as his second damsire Sadler’s Wells. His dam is a three-quarter sister to English St. Leger victor (and dual Breeders’ Cup Turf winner Conduit).

Final Word
If you haven’t guessed by now, this is a wide-open field with plenty of opportunities. Enjoy the race!