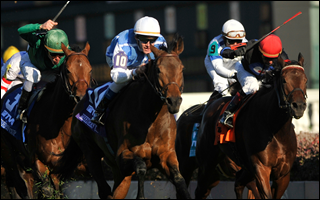 This year we did some digging through the Breeders’ Cup statistics site to drum up a few more potential historical moments.

Jockeys and Trainers
D. Wayne Lukas holds the record for overall wins for a trainer with 18, and still will going into next year, although he has two shots to up his number! Jockey Jerry Bailey holds the overall record with 15 wins, but there’s real potential for someone to break it this year. Mike Smith is the closest to taking the honors with 13 wins and seven mounts; next comes Garrett Gomez with 12 wins and a whopping 11 mounts, followed by John Velazquez with 9 wins with an even more whopping 12 mounts. Julien Leparoux with 5 wins and 10 mounts and Corey Nakatani with 8 wins and 7 mounts could tie the record if each wins all of his races.

Single year win record holders are trainer Richard Mandella with four (2003) and jockey Garrett Gomez with four (2008). In addition to Smith, Gomez, Velazquez, Nakatani and Leparoux several riders could take the single year title: Ramon Dominguez (11 mounts), Javier Castellano (10), Joel Rosario and Ryan Moore (9), Martin Garcia and Rafael Bejarano (6), Cornelio Velasquez, Robby Albarado and Rajiv Maragh (5) all have a shot. Pat Valenzuela could tie the record if he wins on all four of his mounts.

Trainer Richard Mandella’s record of four wins in a single year also has some competition with Aidan O’Brien entered in nine races, Bob Baffert entered in eight races, Todd Pletcher entered in seven races and Steve Asmussen and Kiaran McLaughlin entered in five races. Both Baffert (seven wins) and O’Brien (four wins) could set themselves up nicely to be within reach of Lukas’ record next year or the year after.

Friday Night Update: After Friday John Velazquez has two wins and Corey Nakatani & Rafael Bejarano each have one. Bob Baffert, Bill Mott and Steve Asmussen each have one win.

Saturday Update: Surprise history moment: Youngest Winning Jockey in Joseph O’Brien! It also seems possible that Aidan & Joseph O’Brien are the first winning father/son jockey/trainer combo! Also unexpected was the first ex exacta in Mike Smith and Chantal Sutherland in the Classic (does that count as a real historical moment?). Mike Smith also tied Jerry Bailey’s record of 15 Breeders’ Cup wins, we’ll see if he can build on it next year!

Race Specific
Several races have yet to be won by a non-U.S bred;here are the races and potential winners:

Juvenile Filly Turf:
Ireland’s Up (did not win)

And the Juvenile Turf could be won by its first Irish-bred in any of the following: Faraaj, Lucky Chappy or Wrote (winner!). Big Drama will try to tie Midnight Lute as the second two-time consecutive winner of the Sprint (did not win).

No doubt there are other potential historical moments on tap, and please comment if you know of any! But what other notable historical feats await us? Who knows? Certainly no one could have predicted last year’s first televised jockey fight and we almost saw the first crowd-funded Breeders’ Cup entry in Ben’s Cat!