Horses and Hope: From Auction to Adoption
By Teresa Genaro 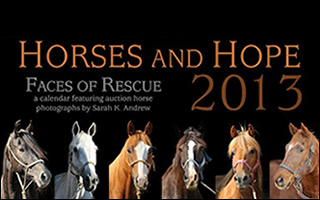 Oh, not those high-end, Keeneland/Fasig-Tipton/Lexington/Saratoga auctions, where well-bred babies are sold for hundreds of thousands, sometimes millions, of dollars, before their careers even begin, before anyone knows whether they can run.

Horse lovers, even the poor ones, flock to those auctions: we stand at the bar, we watch the yearlings, we mark up the sales book, highlighting the progeny of our favorite racehorses. A few times a year, we indulge in the fantasy and the pageantry.

And while all that’s going on, every Wednesday, photographer Sarah K. Andrew goes to another kind of auction, this one in New Jersey, this one full of horses that their owners know can’t run any more, horses that nobody wants. There’s no convivial bar scene; there are no blue-bloods.

The ironically named Camelot auction takes place every Wednesday in Cranbury, New Jersey, when a variety of breeds of horses are put up for sale, among them Thoroughbreds. In 2010, Andrew joined a group of volunteers committed to making sure that no horse would be sold to “kill buyers” who would then re-sell the horses for slaughter.

Andrew began riding horses when she was a little girl; her interest in racing began, she said, “a little later.”

The equestrian is also an artist, beginning with painting and drawing, moving on to photography. The first place the two interests intersected was when Andrew worked for Equiphoto, taking pictures at Monmouth, the Meadowlands, and Philadelphia Park (now Parx). In 2007, she began working on the advertising and distribution staff at Thoroughbred Daily News, in addition to taking photos for the publication.

In 2008, the horse that Sarah had had for 20 years, Alibar, died; his death spurred her interest in Thoroughbred welfare.

“He was once-in-a-lifetime, and there was something about losing him that made me want to do something for other horses,” she said.

That “something” became going to Camelot.

In the past, the horses that didn’t sell at the Wednesday night auction were sold to a feed lot, where they were, according to Andrew, fattened up and shipped to slaughter. Since January of 2010, Andrew has shown up on Thursdays to take their pictures, with the full permission and cooperation of Camelot’s owners, to try to find them homes before they can get shipped to a horrible death.

“Instead of harping on the bad, we focus on the good and try to make a positive change.”

“Horses and Hope 2012” is that positive change, the tangible evidence of Andrew and her colleagues being the change they want to see in the world.

Andrew’s photos of the leftover, castoff horses at Camelot would be posted on various websites, by Andrew and by the other people who work on their behalf of the Camelot horses, for potential adopters to scrutinize.

“At the end of each day of shooting,” she said, “I would always get one shot, not a straight conformation photo, but one that was more artistic. I started posting them and people suggested that I do something with them.”

That’s where Gina Keesling comes in.

Andrew had been worked with Keesling on some Christmas cards when they began discussing producing the calendar. Keesling owns and runs Hoofprints, a small printing company that specializes in equine-themed products. Her husband is a farrier. She and Andrew initially hooked up through Facebook.

“A couple of years ago,” Keesling explained, “I decided to have a presence for my business on Facebook. I use a lot of photography for our Christmas card art, and many of the photographers had Facebook pages.

“As I would go through their photos and images, I kept seeing Sarah’s name. We became Facebook friends, and that led me to the Camelot page, and I got sucked in there from there.”

Keesling’s background in design was invaluable in producing the calendar, which Andrew initially envisioned as rather simple: 12 months, 12 photos, 12 horses. 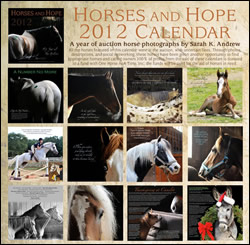 Keesling had other ideas.

“She kept asking for more pictures,” said Andrew, “and she suggested that the calendar inform people about the rescues that take in the horses.”

“We didn’t have a clue what it was going to be,” said Keesling. “We’re a small company, so we do all the typesetting and layout for our products and for our calendar. I wanted the calendar to run in our catalogue, so I laid out the cover and one month; the catalogue went to print and we had no plan for the rest of it, and three weeks to get finished.”

Keesling went through thousands of Andrew’s photographs, eventually selecting about 100 to go in the calendar.

“It was daunting to wade through all the pictures,” she admitted. “They’re all so good and it was tough to choose. Eventually, though, each page evolved as a theme, and the specific images just came.”

Though both Keesling and Andrew are of the potentially depressing nature of the project, which focuses on an element of the horse industry that many people would prefer not to think about, they were determined to keep the tone of the calendar positive.

“We wanted it to be inspirational,” said Andrew. “It’s not just about this auction. We want to inspire people to do something in their communities, to show people that there are horses out there everywhere that need help.

“We want to get people to think about what they can do at a local level,” she continued. “Look around, see if you can help out. Call your local track to see if they need pictures of horses that need homes. Donate feed to a local rescue. It doesn’t require a lot of effort to use the skills that you have to try and help.”

“One goal of the project,” concurred Keesling, “is to empower other efforts, to encourage other people to take on their own projects. We’d love to serve as a model for other initiatives.”

To encourage other organizations to take on similar projects, Keesling talked to the printer that she uses for Hoofprints, who authorized her to pass on a quote to others who might be interested in producing a calendar.

“If other groups could do what Camelot does,” she said, “there wouldn’t be many horses left to kill. It’s marketing & educating, matching up horses and owners.”

The calendar sells for $14.95 with all proceeds beyond the printing costs going to the Kentucky-based One Horse At A Time, an organization that, according to its mission statement, “provides resources to those who rescue horses and to educate the public about responsible equine ownership.” Rescues and other organizations can apply for grants to help fund their efforts.

According to Keesling, thousands of calendars have been sold. Last week, Andrew drove to Kentucky to present Penny Austin of One Horse At A Time with a check for nearly $25,000.

Through Andrew and Keesling’s efforts, more than money is being raised. So is consciousness, about ways to help, and so is awareness of what the Camelot volunteers have accomplished.

According to Andrew, since the Camelot volunteers have begun posting photos of horses that need homes, not a single horse has shipped to slaughter from Camelot. Over 2,800 horses have been sold privately through the group’s efforts.

Many of those horses appear in the calendar, along with quotations that honor the spirit of the horse and the efforts of the volunteers. The calendar’s words and images are deeply spiritual, a result, perhaps, of what Keesling identified as a divine spirit infusing the project.

While drawing on such inspiration, the calendar also stay firmly rooted in the practical.

“This isn’t about pulling horses out of auctions,” said Andrew. “It’s about the horse community grouping together and using our resources.”

The second printing of the calendar is going fast, but calendars are still available through Hoofprints.