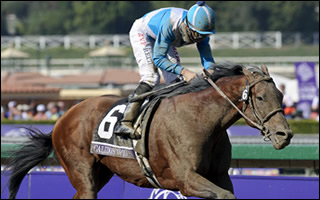 Hurricane Sandy kept us from getting one our favorite annual posts up earlier but we’ve already seen two historical moments so far!

Mike Smith became the most winning jockey scoring his 16th win aboard Royal Delta in the Ladies Classic, and he’s got five chances to increase that number today. 9-year-old Calidoscopio became the oldest Breeders’ Cup winner. Prior to Calidoscopio several 7-year-olds were the oldest to win: Cardmania (1993 Sprint), Miesque’s Approval (2006 Mile), Elmhurst (1997 Sprint).

Update: Smith now at 17 wins with Mizdirection in Turf Sprint.

Turf Sprint contender California Flag is also coming off a notable layoff with his last race on April 21, 6-1/2 months off. He’ll also be running his in his fifth consecutive Breeders’ Cup. Perfect Drift started in five consecutive Classics, never finishing better than third (twice!). California Flag won the 2009 edition of the Turf Sprint.

Update: We missed Mizdirection’s layoff! She was last out on May 27, a 6 month lay off. This might be the win off the longest layoff baring a win by Animal Kingdom, we will confirm!

More to come as we uncover them! Here’s hoping we witness plenty of history.

Wrap Up New
We still have to confirm (confirmed!) Mizdirection’s layoff as the longest successful layoff at 5 months (Animal Kingdom was close with his second in the Mile!) and Mike Smith topped off at 17 wins.

One we initially missed was trainer D. Wayne Lukas adding a win to his existing record for a total of 19 BC wins. He scored an upset with Hightail in the Juvenile Sprint of Friday. Prior to that his last winner was Folklore in the 2005 Juvenile Fillies.