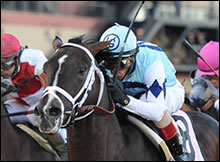 Nothing impresses more than a well-timed historical nugget to fill an uncomfortable silence at your favorite Kentucky Derby party or hangout. Here are a handful–courtesy of the Racing Geek Division at Raceday 360–to ‘wow’ your friends and neighbors on Derby day:

Jockey Rosie Napravnik–aboard Mylute–will try and become the first woman to win the Kentucky Derby. A finish of eighth or better would put her in the record books as the best Derby finish by a female jockey, beating a milestone she set in 2011 aboard Pants on Fire.

Goldencents jockey Kevin Krigger–a native of St. Croix in the U.S. Virgin Islands–will attempt to become the first black jockey to win the Derby since Jimmy Winkfield in 1902.

Jockey Calvin Borel, a recent Hall of Fame inductee, is trying to win his fourth Derby in a span of seven years–something that has never been done in history (the best so far is four in eight years by Bill Hartack from 1957 to 1964). Only one other jockey–Bill Shoemaker–has four wins. A win by Borel would put him one behind the leading jockeys in Derby wins (Bill Hartack and Eddie Arcaro each with five).

Goldencents trainer Doug O’Neill will try and become the first to train the Derby winner in consecutive years since Bob Baffert did it 1997 and 1998 with Silver Charm and Real Quiet. O’Neill would become the seventh trainer to win back-to-back editions in the race’s history.

Trainer D. Wayne Lukas (Oxbow and Will Take Charge) would become the oldest trainer of a Kentucky Derby winner at 77. The current record is held by Charlie Whittingham, who was 76 when he won with Sunday Silence in 1989.

An Oxbow win would tie the oldest combined age for a jockey and trainer in race history. D. Wayne Lukas (77) and Gary Stevens (50) have a combined age of 127 years. The current record is held by the connections of Ferdinand with jockey Bill Shoemaker (54) and Charlie Whittingham (73) also a combined 127.

Revolutionary’s connections of owner WinStar Farm, jockey Calvin Borel, and trainer Todd Pletcher won the Derby in 2010 with Super Saver. They would be the first combo to repeat in the Derby since 1973 when owner Meadow Stable, jockey Ron Turcotte, and trainer Lucien Laurin won with Secretariat a year after winning with Riva Ridge.

Verrazano would become the first undefeated Derby winner since Big Brown in 2008 and the fourth since 1977 when Seattle Slew did it. Smarty Jones (2004) and Barbaro (2006) are the other undefeated winners of the Kentucky Derby.

Apollo is the last colt (1882) to win the Derby without a start as a 2-year-old. Verrazano has the best shot to finally end the talk about Apollo–he made his first start this past January 1st.

Lines of Battle will try to become the first winner of the UAE Derby to finish in the top four of the Kentucky Derby.

Orb will try to become the first winner of the Florida Derby since Barbaro in 2006 to win the Kentucky Derby. – WINNER

Java’s War will try to become the first winner of the Blue Grass Stakes since Strike the Gold in 1991 to win the Kentucky Derby.

Overanalyze would be the first Arkansas Derby winner since Smarty Jones in 2004 to win the Kentucky Derby.