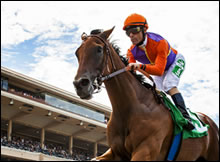 We’re back once again for one of our favorite posts of the year, and in some years our only post of the year (sorry about that!). We’ve been following Breeders’s Cup history in the making since 2010, so be sure to check out our previous posts: 2010, 2011 and 2012.

While we’re not entirely sure what the previous record is, assuming they all make it to the gate, this year has nine returning winners from 2012. Beholder is the only returning winner trying to win a different race than she won last year, and if she pulls it off, she will be the first winner of a Breeders’ Cup juvenile race to win another Breeders’ Cup race. And, she’ll join the great Zenyatta as the only other horse to win two different Breeders’ Cup races (Zenyatta won the 2008 Ladies Classic and 2009 Classic).

Royal Delta could also join great company in the form of Goldikova if she wins the Distaff. She would be only the second horse to win three Breeders’ Cup races and the first three-time winner of the Distaff.

While not history making per se, should The Fugue win the Turf she will be first filly since Miss Alleged in 1991 to do so. And, should Point of Entry win the turf he will be just shy of Mizdirection’s record breaking win off a five month lay-off.

As for trainer and jockey records, D. Wayne Lukas and Mike Smith will look to widen the already impressive margins on their current records. Smith has a whopping 12 chances to add to his record 17 wins. And, several of them are deserving morning line favorites:

Jockey John Velazquez is the only capable to overtake Smith’s record or put himself in a position to more easily do so next year as he has a mount in every race but one this year. And, his mounts include Wise Dan and Point of Entry. Gary Stevens with eight Breeders’ Cup wins and 10 mounts is very unlikely to end up on top this year but could definitely put himself in striking range for next year.

D.Wayne Lukas had five changes to increase his current winning record of 19 Breeders’ Cup wins with All Cash (Juvenile Turf), Strong Mandate (Juvenile), Fast Bullet (Sprint), Skyring (Turf) and Will Take Charge (Classic). And, should he win this year, he’ll best a record he set last year of oldest trainer to saddle to a winner (age 77 last year).

We didn’t get a chance to dig too far into the potential records for internationally bred starters, but either Brujo de Olleros in the Dirt Mile or Great Hot in the Filly and Mare Sprint could become the first Brazilian-bred Breeders’ Cup winner.

And, we didn’t have a lot of time to dig through the Breeders’ Cup excellent stats resource this year, so please let us know if we missed something! And of course we’ll add anything that we see.

Mike Smith certainly added to his record by winning three races for a total 20 Breeders’ Cup wins but sadly John Velazquez was not able to ride all of his mounts after being tossed in the Juvenile Fillies early on Saturday. We wish him a speedy recovery! Jockey Gary Stevens had a fantastic BC, winning both the Distaff and the Classic and D. Wayne Lukas came oh so close in the Classic with Will Take Charge to add another win to his record. And finally, Kathy Ritvo became the first female trainer to win the Classic.

There were plenty of track time records, which we won’t record here, but we’ll dig around some more to see if we missed anything!