A Look at Breeders’ Cup Run Backs: 2013
By Dana Byerly 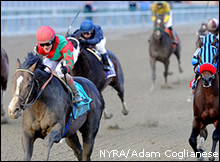 For the past few years at Hello Race Fans we’ve keep track of the Breeders’ Cup starters through the rest of the year (2011, 2012, 2013). It started as a way simply to track retirements, injuries and returns but this year we expanded the coverage to include works and starts for every 2013 Breeders’ Cup starter.

Paying such close attention became interesting quickly as so many starters remained in training. The 2013 Breeders’ Cup starters made a whopping 60 post-BC starts, or run backs, throughout the rest of the year. Naturally this made us wonder if this seemingly large number of post-BC run backs was on par with previous years. We’ll share our findings in a separate follow-up post, in the meantime let’s take a look at 2013.

A Look at the Races
First let’s look at those how those 60 starters shake out by race. In addition to shear volume it’s notable that each of the 14 2013 Breeders’ Cup races had at least one starter.

You didn’t have to be paying much attention to notice that starters coming out of the Classic did well, with 3 winners and a place for four starts, while starters coming out of the Dirt Mile, with no winners, one show and three lasts for seven starts, did not. But the Classic wasn’t the only productive race. The Filly and Mare Sprint saw one win and one place for three starters while the Marathon, Sprint and Turf Sprint each produced two winners. The Sprint and Turf Sprint also each produced two places while the Sprint had two shows to the Turf Sprint’s one show.

Of the not-so-productive races, the Filly and Mare Turf and both races for juvenile fillies went winless, but were nowhere near the level of the aforementioned Dirt Mile with zero wins, zero places, one show and three lasts.

While they aren’t included in the stats, there were four 2013 Breeders’ Cup starters that ran in the first week of January. On January 4 Turf Sprint starter Jeranimo won the Grade 3 San Gabriel and Juvenile Fillies Turf starter Nesso won the Gasparilla Stakes. On January 1 Marathon starter Ever Rider ran 3rd in an AOC at Santa Anita and on Jan 2 Turf Sprint Starter Boat Trip also ran 3rd in an AOC at Santa Anita. Both Boat Trip and Nesso were making their 2nd post-BC start.

Here’s another way to look at how 2013 Breeders’ Cup starters fared for the rest of the year on a per race basis:

And a look how the 2013 Breeders’ Cup races by percentage of starters:

Note: The chart starts with the Classic at 6.7% in blue at the top and follows the key clockwise to the Turf Sprint at 13.3%. The Distaff and FM Turf each represented 1.6% of the total run back starters.

A Look at the Starters

Overall the percentage of winners and in the money finishers seems solid. Let’s start off with a look at the winners.

Of the 14 winners, 5 ran at the same distance, 7 cut back in distance and 2 stretched out in distance. With 50% of the wins coming from cutbacks, this might be an angle to keep an eye on moving forward.

As it turns out all but two of the post-Breeders’ Cup run back winners come from horses who have at least ran in a Breeders’ Cup with five sired by BC winners. Both of Will Take Charges’s parents ran in the Breeders’ Cup.

Other fun tidbits include…

And finally seven of the 10 Cigar Mile starters came out of the Breeders’ Cup (chart courtesy of Brisnet.com), which sounds like it could be a record of some sort.

So what can we learn from all of this? I’m not sure, other than 2013 Breeders’ Cup starters cutting back in distance have done well. Perhaps a stat-head among you can make some interesting inferences in the comments, but only time will tell if we should just file this under #interestingbutuselessstats.

As mentioned earlier we’ll have a follow up piece soon to take a look at how 2013 stacks up against the last few years.