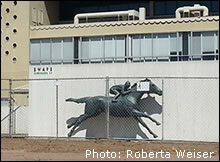 On Friday, January 16, after almost 69 years in operation, Atlantic City Race Course closed its doors. The announcement seemed inevitable after more than a decade of deterioration to the physical plant, despite the track’s successful boutique turf meet that saw increases in both handle and attendance each year.

ACRC was the latest casualty of racing’s contraction, following the closure of Suffolk Downs in October after 79 years of racing and of Betfair Hollywood Park in 2013 after it completed its 75th racing season. Three venerable tracks that once played host to the brightest human and equine stars in the sport, venues that were once considered the best of racing, shuttered.

How will the history of these tracks be documented? Much of their narrative—from attendance numbers to the story of their declines—can be found in local libraries and racing databases. But what of the untold stories? What of the documents, created over decades by teams of pressbox citizens, photographers and videographers? In their heyday, all of these tracks were their own in-house production teams for every kind of media imaginable, creating a repository of film clips and win photos, programs and media guides, which more likely than not are now sitting in files and boxes in long-forgotten corners of now-defunct racetracks. All of these records, so important to tell the story of the track, the people who worked there, and the horses that raced there—the story of the sport of horse racing—what of them?

Far too often, responsibility for preserving and saving these materials falls to dedicated staff members who can’t bear to contemplate the work of their predecessors heading for the dumpster, people like Kip Hannan, the former supervisor of production operations for Hollywood Park’s television department, to whom fell the task of curating and restoring the track’s extensive collection.

When the rumors of the track’s demise started to fly, Hannan began the process of archiving and restoring the vast library at Hollywood Park. It seemed as though no one imagined that there would be a need to preserve the story of the track—all signs pointed to generations of publicity staff who never anticipated their work needing a home. “There was absolutely no plan in place. I was surprised that the library and press box were just left without an exit strategy,” Hannan recalls.

What he uncovered is nothing short of a gold mine of primary sources that tell the story of Hollywood Park. Hannan is most impressed with the caliber of jockeys and horses that raced at the track, and the footage of celebrities and packed stands, reflecting a time when racing didn’t need gimmicks to get people through the gates, when people came for the quality of the racing and to see and be seen among Hollywood’s elite.

When he agreed to take on the archives, Hannan wasn’t sure where they would go, but he was sure that he didn’t want everything to sit in a basement gathering dust. “People can’t believe the amount of footage there is,” says Hannan. “When they learn about it, they want to know how far back it goes. They are fascinated that we have footage of Seabiscuit from the 1930s, or films of Citation and Swaps.”

People with connections to the track frequently reach out to him, asking if he has races available, and he will comb through the archives to find a favorite ride, a special horse, or an important race. “I like to make people happy,” he says. “They think they’ll never be able to see and relive those memories again. They light up when they know it’s available.”

Hannan stayed on at Hollywood Park for ten months after its closing, methodically organizing the remaining documents with his assistant Roberta Weiser, a mutual clerk who had worked at the track for 34 years and volunteered her time to help him catalog everything as the track was taken apart piece by piece around them. He soon found himself in possession of more than just the film and video archives. “After the head of publicity left, I went up to the press box and workers were in the process of removing everything. I stopped them, gathered everything up, and moved it to the television department.”

He still maintains access to the documents and audio visual sources, and is currently at work on a project financed by Hollywood Park management that will digitize every stakes race held at the track. A detailed database will accompany the project, utilizing the metadata collected from programs and other sources. Many of the books, photo negatives and scrapbooks have found a home at the University of California Los Angeles. The school’s library system reached out to him in the final months, their interest piqued by Hollywood Park’s status as a cultural icon of the Los Angeles area.

In an industry that is more often fractured than united, finding a place with the resources capable of taking on such work is easier said than done. As tracks continue to close around the country, there is a real and immediate need to develop a sustainable plan to archive and protect their historical documents. “It’s scary knowing that other major tracks aren’t archiving,” Hannan notes. “Things are slipping away, and once they are lost, they are lost forever.” The most immediate need is at tracks that don’t have the historical cachet of Hollywood Park. What happens when a track closes without an in-house advocate, or if the closing is unexpected with little time to prepare?

The impetus to inventory archives and put in place plans for their transfer has traditionally been on the publicity staff of each track. But, as Hannan notes, more often than not, “no one wants to devote the time or the resources to doing it the right way,” and this is especially true for tracks that have already slashed their operational budgets in a last-ditch effort to keep their heads above water.

The answer lies in nothing short of a proactive industry-wide effort to archive and protect each track’s historical assets. Hannan envisions a national foundation, established to liaise with track ownership and coordinate with staff to properly organize, store and transfer documents before the question of what to do with them arises, and to support their preservation when that time comes.

“The stories [about the closure of Hollywood Park] in the Daily Racing Form and The New York Times got us a lot of exposure,” says Hannan. But that exposure has not led to a rallying cry in the industry.

“It’s frustrating to see—even within the same circuit, there’s no coordination between tracks to unite—how can we expect it on a national level? We need someone with power who is still in the industry and has a voice to light a fire and get stakeholders motivated to make this a priority and to dedicate the funds needed to ensure its success.”

The place horse racing plays in American culture is documented in tracks across the country, and each track has its own unique story to contribute to the greater American racing narrative. It’s time to give these archives the treatment they deserve. A historic preservation foundation could unite the industry in an unprecedented way, ensuring that generations to come will be able to find and share the gems of the past. “Our sport deserves more than being on YouTube, where races have been generously uploaded from someone’s private collection,” says Hannan. “Giving back a piece of history to the fans, to the historical figures, that’s the most important thing. These living legends are getting older, they’re passing away. We need to tell their story when they no longer can.”