But before these milestones, there were some other female jockeys. They may not have broken official barriers, but they led the way for today’s women riders. It’s March, women’s history month, which makes this a good time to look back at some of these early female riders.

In 1898, a Mrs. Bagwill was riding racers in Nevada. She was 24 years old and rode some winners at the Nevada State Fair. Turf, Field, and Farm mentioned that she rode astride. She wore jockeys’ silks. In 1907, the New York Times reported that 14-year-old Dorothy Tyler debuted at the racetrack in Joplin, Missouri. Tyler, reportedly willful and stronger than all the boys in her hometown, had her own racehorses, which she groomed herself. She won at a quarter mile on Blackmare, beating a professional jockey. The crowd cheered wildly. “Since she was a small child Miss Tyler has been fond of outdoor sports,” the reporter wrote. “Her father has let her have her way in most things.”

Later that same year, there was a rumor of an American woman jockey sweeping France. The idea seemed so representative of a maverick American spirit, something Europeans would imagine Americans as doing, kind of a “who knows what they’ll think of next?” trend. But, as the Washington Post reported, the woman in question wasn’t American or a jockey. She was an Englishwoman who had visited America and fox-hunted there. Then she visited Chantilly, a noted horse racing center, and somehow the stories got conflated. “Unfortunately for this picturesque story, which the French papers ‘find’ so essentially American, she does not come from America, and is not dreaming of becoming a jockey,” the Post reported.

In 1909, a girl jockey named Dorothy Kincel became famous through Minnesota, the Dakotas, Nebraska, and Iowa, riding at state fairs and some race meetings. A magazine called Sketch said that Kincel trained her own horses and was “her own stable-boy.” She was profiled in The Thoroughbred Record, and The Washington Post also picked up the story. A “great natural jockey,” she ignored the cheers from grandstands, and was “all business” as she headed to the start. Kincel was a tough, athletic kid who could “pick up a hundred-pound keg of nails with her finger ends.” Her mother said that she and her daughter rode in a train with “sweaty horses, Dorothy in her jockey clothes, and all the other jockeys; we rode all night in an old box car, as the caboose was full of drinking men. It was that or be $100 out of pocket. You see the life is hard. But the girl makes good money for two or three months that helps to support us and send her to school.”

In 1912, two American jockeys who rode in Hungary reported that a local woman had become a jockey by watching them ride. She rode her first winner in Budapest that October, and the Americans noticed her courage, ability to judge the pace, and good hands.

In 1924, Eliza Carpenter died. She was 75 and a former slave who had become a Sooner, making the run into Oklahoma on a chestnut mare when the territory was opened for settlement. According to an article in the Baltimore Afro-American, she was the only African-American racehorse owner in Oklahoma. She raced horses—Irish Maid, Blue Bird, Little Brown Jug–at Topeka and Tijuana. Carpenter primarily employed a jockey named “Lucky” Johnson, but when she was displeased with riders’ work, she would ride her own horses.

By 1927, the idea had gripped American imagination enough that star Bebe Daniels was in a movie called “Miss Jockey.” (See the poster here.) According to the poster, she plays “a madcap miss whose cradle was a saddle. How she takes the men and horses over the jumps! And wins the big race to save the lad she loves—and how! Gowns? Sure.” The idea that a horsewoman needed to pay attention to her dresses came up again in a 1928 Atlanta Constitution article. Race promoter Jim Coffroth was considering all-female jockey races in Tijuana, the article said. Racing men, the piece said, were undone by the news. “The very thought of a derby, a futurity, or a steeplechase presided over by a bob-haired band of gigglers, has them in the throes of panic.” Ironically, the article was illustrated with photographs of two accomplished horsewomen, neither known as a “giggler.” One was Western rider Helen Johnson, and the other was rider and trainer Judy Johnson, who in 1935 became the second woman to earn a trainer’s license in New York.

Coffroth would get his way. In 1931, women riders raced at Agua Caliente for the La Jolla Town Plate (pictured above). Babe De Freest won, aboard a horse named Big Bill Thompson:

In only eight more years, Aldred would earn her license, and the dynasty of women jockeys would continue. 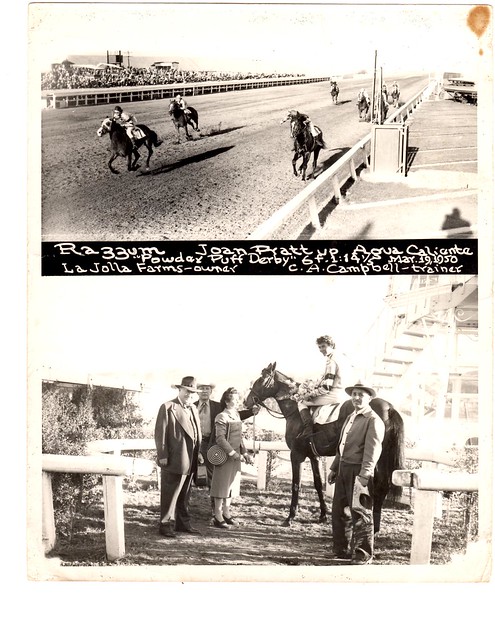